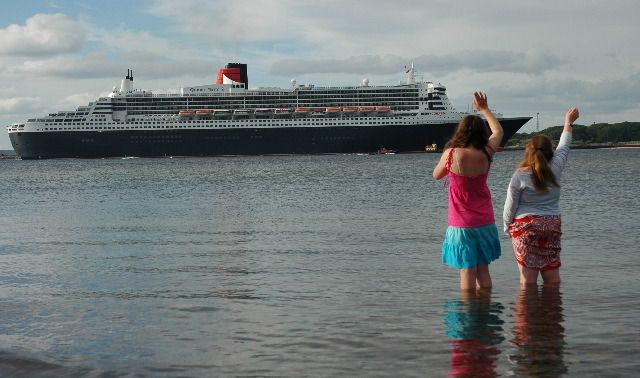 lengths
overall: 1132 feet (345 metres)
beam: 135 feet (41 metres)
beam at bridge wings: 147 feet 6 inches (45 metres)
draft: 32 feet 8 inches (10 metres)
heights
keel to funnel: 236 feet 2 inches (72 metres)
the overall height of qm2 is limited by the need to pass under new york’s verazzano narrows bridge.
passenger capacity: 2, 620 (lower berths)
3, 090 (maximum)
decks: 19
passenger decks: 17
electric current: 110 and 220
lifts: 22
itineraries: qm2 will offer regularly scheduled transatlantic crossings between southampton and new york, in addition to cruises to the mediterranean, northern europe, the caribbean and canada.
technical data
gas turbines:
the two general electric lm2500+ gas turbines will generate 25mw of electricity each, which is equivalent to 81, 000 shp. They will run at 3, 600 rpm and turn a generator through a reduction gearbox. The turbines will burn marine gas fuel oil and will generally only be run when the ship needs to achieve higher speeds.
diesel engines:
the four diesel engines will generate electricity and are located low down in the ship due to their size and weight. Each engine will be 12.5 metres long, 4.4 metres wide, 5.5 metres high and weighs 217 tonnes.
the diesel engines will be built by wartsila and are v engines with 16 cylinders. They will have a bore of 460mm and a stroke of 580 mm. Each engine will run at 514 rpm and produce 16.8 mw of power. They will run on conventional heavy fuel oil.
the engines are of the enviroengine design that uses commonrail technology utilising water injection into the chambers to reduce noxious emissions.
mermaid pods:
qm2 will feature mermaid pods built by rolls royce-owned kamewa and alstom powers motors. She will be the first passenger ship to be driven by four pods. The forward two will be fixed in place while the aft two will be able to turn through 360-degrees to steer and manoeuvre the ship.
each of the pods will weigh 250 tons – the largest and most powerful ever made at 21.5 mw each. This will give a total propulsion power of 86 mw. The pods will be individually hydrodynamically shaped to help attain the speeds required of qm2.
unusually the propellers themselves will be stainless steel and have a highly skewed fixed pitch.
thrusters:
qm2 will have three thrusters of 3.2 mw each allowing the ship to turn in her own length in port without the use of tugs. These will operate with a fingertip touch by the captain.
the total plant will be capable of producing nearly 118mw of electricity - that is about twice the power of a 100, 000-ton conventional cruise ship.
speed:
normal cruising speed will be between 24 and 26 knots (approximately 30 mph); with the power being obtained from the four diesels.
maximum speed will be approximately 30+ knots (34.5 mph) which will be obtained from both the diesels and gas turbines.
stabilisers:
two sets
dynamic positioning:
qm2 will be the most technically advanced ship with regard to manoeuvre control ever. She will be capable of being manoeuvred by a single joystick on the bridge that can move the ship sideways or at an angle or even keep station over a fixed spot on the earth by use of satellite and wind gauges. The system will involve the pods at the rear of the ship and the thrusters at the forward end.

Added by Andrew Bathie on 25 June 2005
First Officer is Derek Clunas from Nairn, and as QM2 left the Sutors she turned 5° stbd .
to pass abeam Nairn en route Norway. The vessel turned comfortably in her own length berthing at Invergordon. This was the 80th vessel I have Guided from, taking my Group to Cawdor Castle, and around Inverness. Her sister ship the QE2 will make a return trip to Cromarty Firth on the !st August.
Added by Clem Watson on 26 June 2005
Clem, she certainly has a "blessing o sheds" aboot her.
Added by Ian Jack on 26 June 2005
What a shame I won't see that either - I shall be preparing for my trip to California US of A. I'm going over there for a wedding. I WILL make it to Cromarty when cruise ships visit of that I'm determined.
Added by Mary Mackay now Harrison on 26 June 2005
well done, job is a good one ! build in europe ! the best ever ! hopefully not the last one to be build in europe ! get going lads, lassies be proud!!!!!!!!!
odered by an american company.......europe at its best !!!!!!!!!!!!
Added by Ingo on 17 July 2007