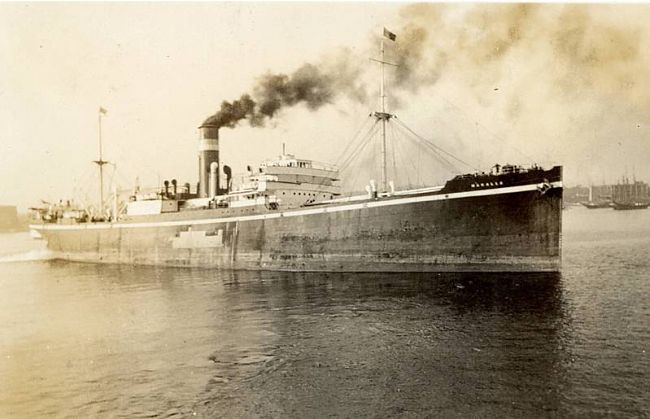 This is the 6,677t SS Makalla that was built in Port Glasgow in 1918 and sunk in the Moray Firth by German aircraft in August 1940. She was sailing in convoy from Liverpool – London – India when she was attacked. Another ship the 5,030t Llanishen was also sunk in the same incident.

My father can remember waking one morning during the war to see a ships mast sticking out of the water just off the North Sutor. Wartime restrictions meant that these things were not reported so he never knew what had happened. I would be interested to know whether it was either of these ships as the Makalla sank the day after the attack so may have been heading for the relative safety of the Cromarty Firth.
Picture added on 27 November 2005
Comments:
Before WWW2 SS Makalla sailed out of Birkenhead on the regular 'India Run'. She was crewed mainly by apprentices - "Brocklebank's Young Gentlemen". of whom my elder brother was one. The rough crew work was done by Laskars, although I remember how the young gentlemen had to Holystone the decks. Other ships of the same line and era were SS Maidan - SS Media - SS Mahsud and SS Anchoria (Anchor Brocklebank Line. Even then the Line was associated with Cunard. My brother, having been awarded his 'Mates Ticket' gave up the sea because of eyesight trouble and when war started joined the Royal Artillery, being evacuated from Dunkirk and later serving in North Africa and Italy, where he was awarded the MBE. At one time in Italy he and I were only 14 miles apart, without knowing it. It was very much to his regret that he had to leave the Merchant Service. He later died of cancer.The photograph is a good representation of the old ship, but being old and therefore in monochrome the blue and white smokestack bands do not stand out well. One occasion I remember was when she sailed back to UK from Colombo with a full cargo of Mazawatti Tea. Her photo was featured in a press Advertisement.
Added by Peter Batchelor on 06 May 2007
It must be taken care when looking the truth about the ship Makalla. Well, it's a story which need more time.
Added by Abdallah Makalla on 31 May 2007
As reported in newspapers at the time, the Makalla, enroute from GB to New York on 20th January 1926, whilst in mid Atlantic, passed through exceedingly rough weather. Huge waves broke over the vessel carrying away the ship's bell, 19 year old Cadet John Vooght was flung against the Bulwark and sustained serious injuries and died two days later, he was buried at sea. The ship arrived in New York with the flag flying at half mast.
Added by David Vooght on 09 November 2008