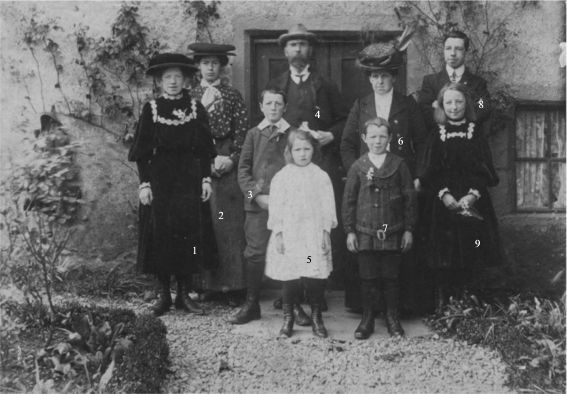 The other people on the photo are:

picture #589 is an unnumbered version.
Picture added on 04 January 2006
Comments:
Is this the same J Bain ..that took many of the old Cromarty Postcards ?? I am trying to find out his background ...and was wondering if this is the same J Bain ? ..any help from anyone would be greatly appreciated .
Added by John Macdonald on 13 September 2010
John - this would seem to the same John Bain who published a series of photos and cards from Cromarty. He was not, however a photographer. I have a book from 1900, published by John Bain, entitled a "Photographic view Album of Cromarty and District". All the photos are scanned and on the image Library, and include the famous Fisher Girls shot.

The photos seem to have been taken by Valentine's of Dundee. They seem to be the main source for photos for Cromarty Postcards from that time.
Added by Calum Davidson on 20 September 2010
Thanks Calum ...I was under the impression ..although not a professional photographer ..he took the shots that bore his name on those postcards ?..many I find very interesting in the way he/they captured the town of Cromarty ..even back then ..
Added by John Macdonald on 21 September 2010
John - John Bain was a not a photographer. The shots we see of Cromarty from the late 19th and early 20th Century he used were taken by photographers employed by a large companies such as Valentine's of Dundee. The way that "he/they captured the town of Cromarty" was down to an unnamed and unknown professional photographer who was in the employ of the Dundee company. Local businesses simply licensed those images for their own commercial purposes, such as books promoting Cromarty as a tourist destination.
Added by Calum Davidson on 25 September 2010
Thanks Calum.. for clearing that up..very interesting ....good advertising then to promote a Draper in Cromarty in those times !!
Added by John Macdonald on 26 September 2010
Just visited Cromarty Feb 2014 never seen this photo managed to find Leonard Bain's grave my grandfather whom I never met . My father is James Leonard Bain. I am James Andrew Bain.
Added by James Andrew Bain. on 24 February 2014
I am Shirley Alsop maiden name Bain, daughter of James Leonard Bain, granddaughter of Leonard Bain whom sadly I never met.
Added by Shirley Alsop nee Bain. on 26 February 2014
James and Shirley, your father is my 4th cousin!!
Added by George Hamilton on 26 January 2015
Hi, good to hear from you. I am Shirley and wandered who your parents were.
Added by Shirkey Alsop (nee Bain) on 29 March 2015
Shirley, my parents were George Hamilton and Annabella Paterson. The connection is through my mother and my Urquhart line. Your 3x great grandfather Donald Bain married Christian Urquhart.
Added by George Hamilton on 10 April 2015
John Bain was my husband's Great Grandfather. If anyone would like more information, I am happy to help.
Added by Karen Bain on 11 April 2016
I am Douglas Bain. I am Herbert Bain (top right's) Grandson. I only met Florrie and Herbert in the picture.
Added by William Douglas Bain on 10 July 2018
Hello Douglas, glad to make your acquaintance.
Added by George Hamilton on 15 July 2018
Hello Everyone,
Well ancestry tells me I‚Äôm part of this family. Who knew ! My Great Grandfather was Thomas Middleton Bain married to Margaret Campbell. My Grandfather. Archibald Theodore Bain born in Nova Scotia . My 2 times Great is Donald Bain married to Christian Urquhart . I‚Äôm just starting this new family Tree so any help , photo are appreciated
Added by Sharon Kinsman on 24 September 2020
Hello Sharon, I can tell you the information I have on your family if you want to contact me directly.
Added by George Hamilton on 19 October 2020
Hello George
Oh I would so love that . My email. Sdkinsman@ sympatico.ca. Thank you ever so much
Added by Sharon Kinsman on 20 October 2020
Some information that might be of interest to the Bain Ancestors. Although John Bain - patriarch of the family photo here - was down in Wales early in his career, he was originally from Cromarty. A number of Cromarty Bain families existed. Indeed more than one Bain family worked at Rose Farm I believe in the early 1800's. This is as far back as it is possible to go as it is not possible to determine one Bain family from another prior to that. Middleton Farm is not far from Cromarty - this may be the source of Thomas Middleton Bain.

My Brother is Donald Bain, named after his great great Grandfather Donald Bain.
Added by (William) Douglas Bain on 20 October 2020
Thank you so much for the information . I have found many Bain‚Äôs but when looking at the dates I thought there must be more than 1 family at Rose Farm . I have found them in Nova Scotia .
Added by Sharon Kinsman on 22 October 2020