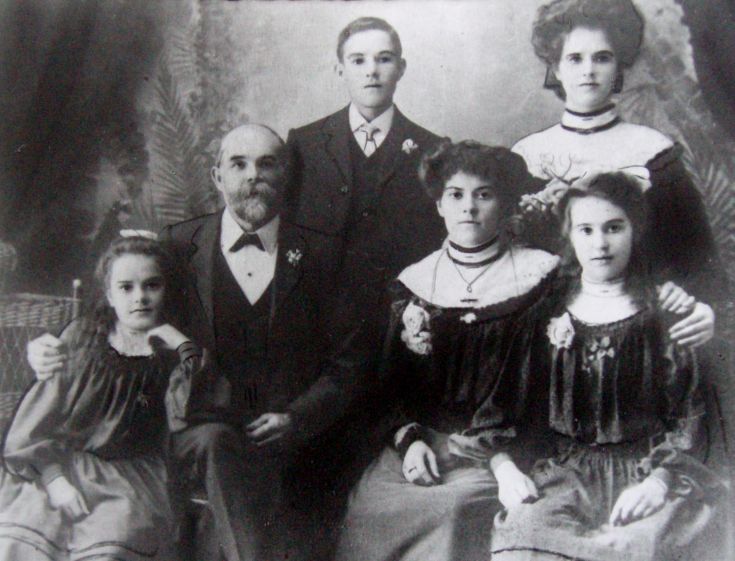 "David Manson Skinner is my great great grandfather and was born on 26th June, 1856 in Fishertown, Cromarty. He was a fisherboy in 1871 and lived in Shore Street.

His father was John Skinner and mother Ann Taylor Manson - both are buried in the East Church, Cromarty. His wife, Ellen was born in Lanark, Scotland. David and Ellen were married in Lanark before emigrating to Sydney on the 'Bann' on 15th March 1884."

The names on the photo are Mary Jesse Skinner, David Manson Skinner, Robert Bruce Skinner, Anne Taylor Skinner, Eliz Ellen Russell Skinner and Isabel Baxter Skinner.
Picture added on 26 April 2007
Comments:
Isobell Baxter Skinner was my Grandmother. She married my Grandfather Forest Eveleigh Finlay on 10th October 1921. Sydney Australia
Added by Bruce Duncan Finlay on 26 May 2010
Isabel Baxter Skinner is also my Grandmother. I am Bruce Finlays 1st Cousin. I am so happy to find this Photo on your site, what a great Find! Thanks Pamela!
Added by Helen Petrovic (Nee Pidgeon/Finlay) on 04 June 2010
Hi Helen. Thanks for commenting. John Skinner, David's father had two wives, Christian Fiddler and Ann Manson. John and Ann had two children David and Alexander and both came to Australia. It's nice to hear of other family. I have other photos if you are interested or if you need to know more I can be of help. Are you in Australia? Thanks again
Added by Pamela Hoad on 04 June 2010
Hi Pamela,
I am Helen brother Phillip, and I am interested in anything you have, photos and family tree information. I already have an extensive family tree down to present generations and an Aunt who is the matriarch of our family history. Please contact me directly and maybe we can get together. We all live in Sydney, Australia.
Added by Phillip Edward Pidgeon on 04 June 2010
Hi Pamela, I will be in Cromarty on 15th, 16th August 2013 while traveling in Scotland. I look forward to visiting the Cromarty East Church and walking the streets where my Great-Great-Grandfather lived. Any details of the house in Cromarty & What John/David did/worked, dates etc would be much appreciated before I leave. Thank you!
Added by Helen Petrovic on 20 April 2013
Hi Helen,my grandfather was John Manson - His father was David Manson maried to Barbara Ross then Janet Watson my great granny- call into the cromarty courthouse I will be working there on days your here in cromarty .
Added by Sue florence(Manson) on 22 April 2013
Hi Helen. The only address I have for David Manson Skinner is in 1871 he lived in Shore Street, Fishertown. Maybe someone else can add more. He was a fisherboy and moved to 45 White St.Govan in Lanark. Annie Taylor Skinner, fisherwoman, mother of David took the maiden name of Manson for the 1871 census. In the 1881 census she resided at 9 Little Vennel and remained the until she died. David Manson Skinner married Helen McIntyre Simpson and they immigrated on the "Bann" to Sydney from Glasgow on 15th March, 1884 arriving in Sydney on 17th June,1884.
On David Manson Skinner's death certificate his father John Skinner's occupation was listed as a seaman. If I can help you with any more let me know. I would love to hear from you on your return, good luck. Maybe you could find something on Donald Skinner b. 31 August, 1746 M Anne Johnstone in Cromarty. They are buried in the Eastchurch and I have their gravsite photos on this site. They are John Skinner's ggg grandparents
Added by Pamela Hoad on 25 April 2013
Rode with some friends from Tempe Station near the airport along the Cook's River to Rookwood Cemetery with some bike riding friends on April, 1st 2013. Visited the grave of David Manson Skinner and Family. All is good.
Added by Phillip Pidgeon on 06 May 2013
Hi Sue Florence. I am so excited to see your reply. I will definitely call in to say hello on the days that I am in Cromarty. I will bring as much info as I can gather on the lineage of my mums family.
Added by Helen (Petrovic) nee pigeon/ Finlay/ Baxter Skinner on 06 May 2013
Hi Helen, looking forward to your visit, have been in touch with John Fryish (David Manson Skinner's ggg grandson) if you click on my name you should get my e-mail address.
Added by Sue florence(Manson) on 07 May 2013