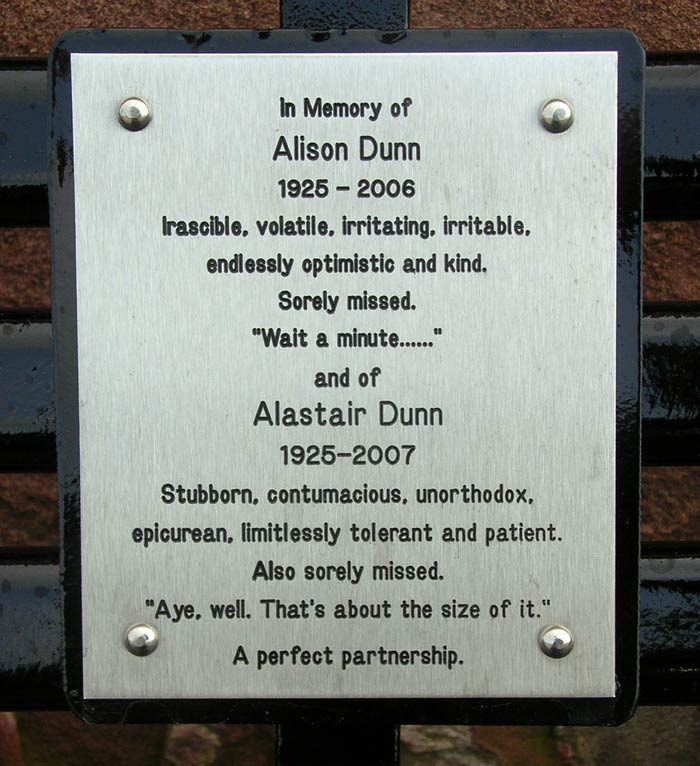 A memorial bench and plaque have been placed by their family at the gable of Seabank House, Shore Street, where they lived for 42 years. Alison placed a wooden bench there in 1966 when we all moved into the house and she opened the pottery shop. As well as being their favourite place to sit of a sunny evening, it has proved a very popular resting place for visitors to the town through the decades.

See also picture #18.
Picture added on 26 June 2007
Comments:
Excellent and memorable, I'm sure they would appreciate it.
Added by Estelle Quick on 26 June 2007
Just Perfect. A wonderful couple who meant a lot to many. I look forward to sitting with all of you one of these days and resting.
Added by Caroline Fair on 27 June 2007
Today, Alastair has been gone one year - the first of an eternity of being unforgettable. Hope to see him and Alison up there when it's my time.
Added by Hans J. Thimm on 13 February 2008
Good Grief. Can you really believe this?

We’re trying to arrange a memorial stone in Cromarty Graveyard for Alison and Alastair, and we thought it would be nice to use this same inscription. The Highland Council, in its wisdom, has refused us permission to include this on a stone in the graveyard.

Mr Dunnet of Highland Council TEC Services states that graveyards are a place of mourning and solemnity, and that they considered our inscription inappropriate and likely to cause upset to other visitors.

I strongly disagree. We are trying to grasp a little of Alison and Alastair’s characters in a few short words, and bring a smile of recognition and memory to the faces of those who knew them, and even to those who didn't. These were real people, and we'd like others who come after to know this, hence our idiosyncratic inscription.

On practically every day since this memorial bench was sited at Seabank House, visitors and locals alike have stopped to read this plaque's message, and it almost universally brings a smile to their face - both at the language (which challenges them to relish their vocabulary - something which Alastair particularly would have enjoyed) and at the way it captures something of the character of these unusual people. Many tourists stop to take photographs of this plaque (over the last 2 years this must number in the hundreds), and some, finding that we had placed it there, said how lovely it is and how touched they were by it.

Yet the Highland Council feels people would be offended if this was on their memorial stone. It just makes you shake your head.

Is anyone upset by this inscription? If you saw this on a stone in Cromarty Graveyard, would you be shocked, or would it make you smile?

Added by Colin Dunn on 05 September 2008
It would make me smile - please put it next to my father's grave! It's good job HC wasn't around in the 18th and 19th centuries to ban some of the quirky (and memorable and funny and rude) epitaphs that were written then.
Added by Estelle Quick on 05 September 2008
Each time I read the inscription I have to smile and am touched to tears as well because it is so human, so understanding, so loving, so full of life, so real. As to the Highland Council, a simple "RIP!" may be more appropriate on their stone...

Added by Hans J. Thimm on 05 September 2008
Dear Colin,
I cannot believe this, surely if you make a noise someone will see sense. Good luck and keep me informed.
Added by Caroline Fair on 06 September 2008
They Highland Council changed their mind, and sense prevailed! Result.
Added by Colin on 08 September 2008