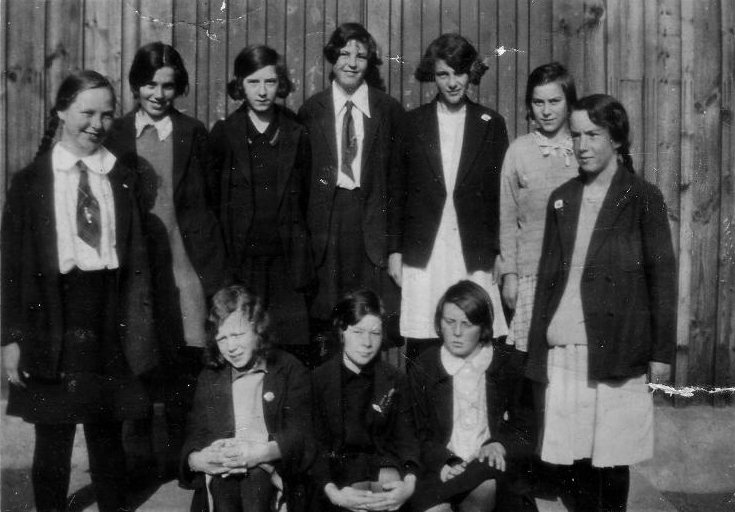 Eric Malcolm gave this picture to my brother Peter, the year we think is 1929, Mother would be aged 12. She has identified the group as:
Back row left to right: Isobel Muir, Catherine Hossack (later Cheeseman), Jessie Reid(later Bird), Hetty MacGregor, Isobel McCloud, Bessie Jack, Cathy Clarke

Front row left to right: Maimie Fraser, Connie Summers, Eva McDonald
Picture added on 27 August 2007
Comments:
I am disappointed that my sister Emily Taylor is not on this picture as I assume she would have been in this class, however during this school period 1929/30 she was ill with Rheumatic Fever fortunately she did recover and returned to school, I haven't any school pictures of my sister Emily and I am very pleased and find it interesting to see them on this website. Emily does appear on a school picture of 1926 courtesy of Eric Malcolm.
Added by Jean Bell (nee Taylor) on 27 August 2007
Can anyone confirm that the young ladies Isobel Muir, Isobel McCloud and Cathy Clarke as on this picture, #1987, are the younger ladies Isabel Muir, Isa Macleod and Cathie Clark as on #333, School Picture of 1926? Notwithstanding the slight differences in spelling.
Added by Jean Bell (nee Taylor) on 27 August 2007
Very interesting picture as I have been trying to trace Isobel Muir who emigrated to Canada with her mother after her father died. They lived in Mizpah House in Cromarty - left to them by Alexander MacKenzie, Isobel's grandfather.
Added by Iain Guthrie on 13 November 2007
Where is Mizpah house and what is it's history?
Added by Lisa McMurray on 11 January 2009