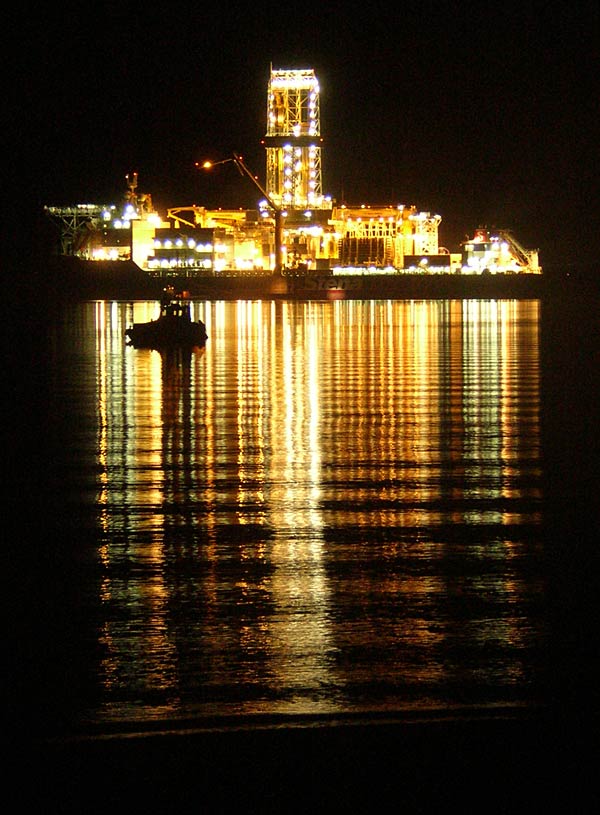 Lit up like this, it’s no surprise that the Stena Carron requires huge amounts of power, which comes from its six Wärtsilä 32 16-cylinder diesel engines. The engines have a combined power of over 40mw.

The Stena Carron is the world's largest drill ship, with a displacement of 97,000 tonnes, an overall length of 228m and breadth of 42m, it is capable of drilling to a depth of 11,000m. It was built by Samsung Heavy Industries Co Ltd in Korea, and has been designed to operate in harsh environments such as the Norwegian and Barents Seas.

(Orginally posted under the name Stenna Drill Max, rather than the Stenna Carron).
Picture added on 04 November 2008
Comments:
Ah! My eyes! Thats so bright! You should put it on here librapix.com/lightpollution/
Added by An innocent victim of more filthy light on 01 December 2008
What a stunning photograph! It's way better than all the London Christmas Lights!
Added by Vivienne Griffiths on 01 December 2008
This was a handy set of lights when I was walking up the road home to Navity one night off the last bus. Home light all the way up to the wood and beyond. Just as well as I'd forgotten my torch.
Added by Flora on 01 December 2008
Flora You are very brave walking on your own at night. Its certainly not safe here [Manchester] absolutely no female does it. That's possibly why we are all out of condition no exercise. We drive everywhere Take care out there
Added by Mary MacKay now Tomlinson Harrison on 03 December 2008
The worst thing I would encounter would be an irate cattle beast or a sheep or the odd deer or wildcat or badger think that covers all the wildlife up my way oops forgot the pinemartin. I always have my mobile on me as well so I wouldnt be stuck thanks for the concern Mary.
Added by Flora on 04 December 2008
Just for the records, the name of this vessel painted on bows and stern when in the Cromarty Firth was Stena Carron, Stena DrillMAX painted on the sides is a reference to the class of vessel, of which there are several.
Added by Ron Stewart on 23 December 2008
I've changed the references from the Stenna Drill Max to the Stenna Carron.
Added by Calum Davidson on 28 December 2008
What water depth has she drilled in? I worked on the Discoverer Seven Seas in the late 1970's and when I left we had just drilled in over 6000ft of water off the Grand Banks, Newfoundland.
Added by David John Williams on 13 October 2011