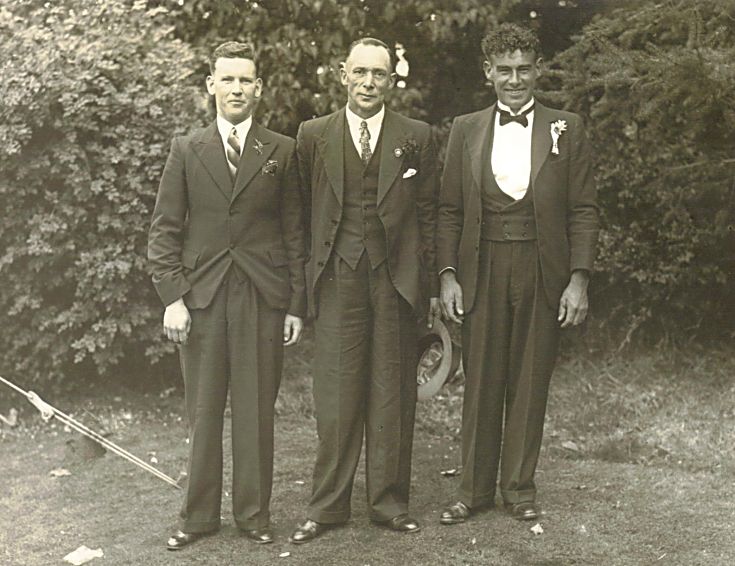 Jane says "Jack Mackay, Dan Macfarlane & George Finlayson at the wedding of Molly Morrison and Pilot Officer Balden Navity 1938. The men were invited to the wedding as they had rescued the pilot when his plane crash-landed in the Moray Firth near to Navity where they worked at the time."

Excerpt from the book Cromarty Living by the Sea

The paper said the men rushed to the seashore, down over the steep cliffs. Mackay and Finlayson swam out to the plane and got the airman extracted from his parachute. Mackay then turned the officer over and, using the life-saving method, swam with him until Finlayson got a rope from MacFarlane on the shore. Mackay tied the rope round the airman and got him ashore and over the rocks. Mackay was slightly bruised by the rocks when landing. They carried the airman to the salmon fishers’ bothy. The men were later awarded Royal Humane Society Award Certificates.
Picture added on 12 March 2009
Comments:
Thank you for this. My husband's grandparents are Molly Morison and Officer Balden, so this is interesting to find whilst researching the family history.
Added by Vicky Elliot on 23 March 2009
I have many photos of this event, newspaper cuttings and accounts of these famous three, but I do not have this photo and I am delighted to see it and will add it to our family history book. You see Molly Morison was my mother!
Added by Jill Morison Fischer on 23 March 2009
Jill I told my mum Babs about your comment and she said to pass on her best wishes to you, she remembers you so very well. Jane
Added by Jane Patience on 27 March 2009
This is a link to the actual wedding!! Capt Balden was my grandfather's brother
www.youtube.com/watch?v=bxTl4YJU-uA&list=UUyg7AG3wB3pDqgh2l1amkHg&index=23
Added by Alex Armitage on 19 March 2013