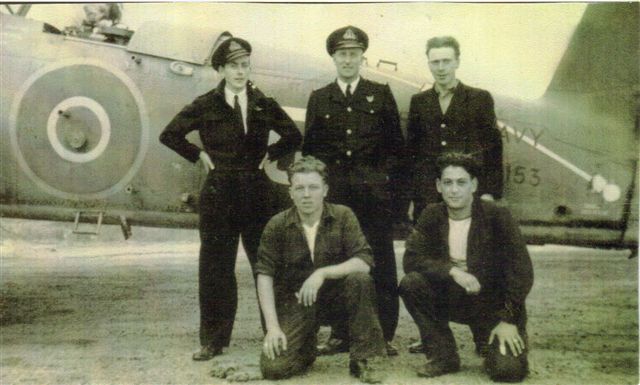 Iain says: "I posted a comment on 13 March re the Barracuda photo on your web site. (See picture #622)

The Observer, next to Don, (?MacKenzie) "belonged" to Inverness and next him in the back row is the Telegraphist Air Gunner.

In front are the airframe and engine mechanics.

If you have received the photo satisfactorily I will 'search the archives' for a letter which gives more details. The mechanic on the right, (sadly now deceased) some years ago, sent a copy of this photo to the Newsletter of the FAA Officers Association. With the photo he sent a letter in which he said that this was "his" crew and that they had been killed in an accident at Fearn and he would like the photo to go to their relatives.

I knew he was mistaken since although more than one crew "failed to return" from various exercises whilst we were at Fearn, only one crew was lost over the land. This was from an aircraft which was doing dive bombing practice on the Range at Nigg Bay, and a wing came off the aircraft during the dive. So this was the only funeral involving 817 members at Fearn."
Picture added on 05 May 2009
This picture is in the following groups
Fearn Airfield
Comments:
Hi Ian, Great photo. Any luck on finding more details on the mechanics "crew". My uncle was at Fearn in 1944 (828 Sqd), and died in a Barracuda crash while there. Discussed on picture #622.
Added by Rob Dalziel on 02 September 2009
21 March 2010
The man kneeling on the right front row was Jack Singer who was the engine mechanic, at the left was the airframe mechanic (or rigger). The observer (looker !) was MacKechnie and the TAG (telegraphist air gunner) Pete Cook. This info from Jack Singer in 2003 and who sadly died not long afterwards.
Added by Iain Crosbie on 21 March 2010