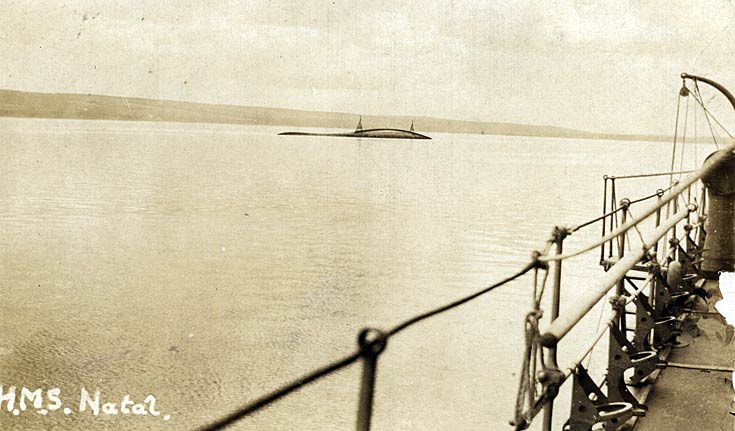 Picture added on 30 June 2009 at 14:18
This picture is in the following groups
The Natal - Warship destroyed by an explosion off Cromarty during WW1
Comments:
This is an interesting shot which I haven't seen before. It seems to be a view from the north looking towards the Black Isle. The beacons were put in place very quickly after the sinking and the wreck must have become a bit of a local landmark. It was sold to a salvage company in 1920 but work to break it up did not start till 1925. The ship was resting on her port side. The ridge you can see in the photo is the starboard bilge keel.
Added by Estelle Quick on 30 June 2009
In the early 1960s my paternal Grandmother, Isabella G MacLean, included the following eyewitness account of the sinking of the Natal in a letter to my father (see pages 124 to 125 of "Your Father and I", published by Tuckwell Press as book No 6 in their "Flashbacks" series):

"HMS Natal was blown up one day near Christmas 1915 when there was a large party of civilians on board for a cinematograph entertainment. All the civilians were killed and hundreds of the sailors. There were funerals in Cromarty nearly every day for a long time, as the bodies were found by divers. One whole family, Marcus Dods, son of the Marcus Dods whose name must be very familiar to you (latterly, 1907-9, Principal of New College, Edinburgh), factor of an estate in Invergordon and his wife and family were aboard.

The Press and Journal (September 1961) has published an account of a book by Cecil Hampstead, "They Called it an Accident", which has an account of the sinking of the Natal at Cromarty. "After a series of loud explosions it sank, a blazing ruin, into the Firth". I must be one of the very few people now alive who actually saw the Natal sink, and so far from being a blazing ruin there wasn't even a puff of smoke. Moreover, nobody on the Cromarty side of the Firth heard a sound at all.

On the Invergordon side there had been a certain amount of noise. (Mother often told of her witnessing the sinking of the Natal. A sailor from the Natal, George Laird, who had been a neighbour of Mother's in Aberdeen, came that afternoon on shore leave to visit mother at the UF Manse: the two of them were standing outside the Manse talking to one another. Suddenly the sailor exclaimed, "The Natal's away." Mother thought he meant that it had sailed out of the Firth. She looked over the hedge towards where it had been and saw two neat halves of it folding in towards one another and settling into the water - to rest, salvage reports were later to tell - on her funnels and gun turrets.

Mother and George Laird hadn't heard a sound. Lines of graves up beside the Gaelic Chapel, and near to our (MacLean) family grave, mark the resting places of a number of those whose bodies were washed ashore."
Added by Fraser MacLean on 03 January 2010
Having started my own career as a film editor back in the pre-digital days of 35mm sprocketed "safety" film - I can't help wondering whether anybody has ever looked into the possibility of nitrate film stock having been a possible cause of the explosion which sank the Natal? The older nitrate stock was, in some cases, so unstable that - if enough of it were heaped together in one place - it could (I believe) combust spontaneously. I can well imagine how even a small amount of such a volatile material - placed carelessly outside its round metal can - could catch fire from any nearby source of heat. Once one length of film was burning, any nearby reels would be quick to follow - as was seen all too often in many an on-shore fire triggered in similar fashion. If anybody knows whether this theory has ever been put forward (or tested), I'd be interested to hear what the expert thinking was.
Added by Fraser MacLean on 03 January 2010
My mother, from Kildary, was to go to a childrens' party on the Natal that day. She had a cold and did not go. She lost friends.
Added by Prof Bill Fraser on 04 October 2010