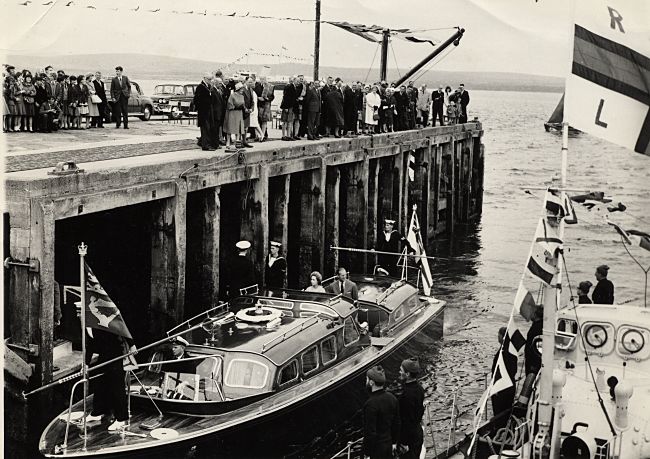 This shows the Queen on her tour of Easter Ross in June 1964. The large version shows close-ups of the people on the harbour.

4:25pm - Arrive at Nigg Pier where the Lord Lieutenant will present:-

Embark in the Royal Barge for Cromarty

4:35pm - The Queen and the Duke of Edinburgh will land from the Royal Barge at Cromarty Pier, where the Lord Lieutenant will present:-Her Majesty will tour Cromarty by car.

At Hugh Miller's Cottage the Lord Lieutenant will present:-and will ask Her Majesty and His Royal Highness to sign the Visitors Book.

The provost will ask Her Majesty and His Royal Highness to sign the Visitors Book and Portraits for the Burgh.

4:50pm - Her Majesty will embark in the Royal Barge at Cromarty Pier

View Large Version
Picture added on 01 January 2003
This picture is in the following groups
Queen's Visit - 1964
Comments:
I'm the smaller of the two silhouettes on the lifeboat at the right. The Duke of Edinburgh shouted 'are you prepared for the worst?' to us.
Added by Clem Watson on 30 September 2003
Other Crew on starboard side, bow to stern, are Billie Bathie, Ronnie Winton, Geordie Morrison, hidden by flag Eddie Scott, myself as previously noted, and finally the late Richard Brooke.
Added by Clem Watson on 11 May 2005