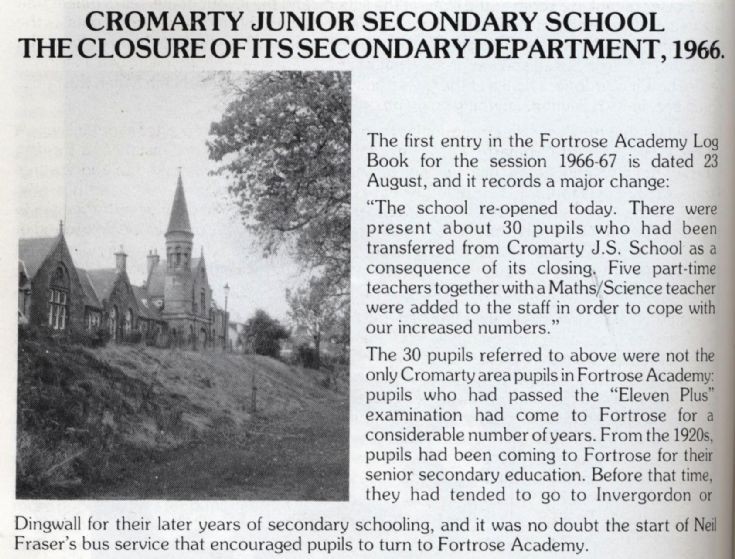 The closure of its secondary department, 1966

The first entry in the Fortrose Academy Log Book for the session 1966-67 is dated 23 August, and it records a major change:

"The school re-opened today. There were present about 30 pupils who had been transferred from Cromarty J.S. School as a consequence of its closing. Five part-time teachers together with a Maths/Science teacher were added to the staff in order to cope with our increased numbers."

The 30 pupils referred to above were not the only Cromarty area pupils in Fortrose Academy: pupils who had passed the "Eleven Plus" examination had come to Fortrose for a considerable number of years. From the 1920s, pupils had been coming to Fortrose for their senior secondary education. Before that time they had tended to go to Invegordon or Dingwall for their later years of secondary schooling, and it was no doubt the start of Neil Fraser's bus service that encouraged pupils to turn to Fortrose Academy.
Picture added on 10 March 2011 at 09:21
Comments:
When I attended school it was Cromarty Higher Grade School. We had French, Latin, science, etc. A long time ago, happy memories, great teachers.
Added by Iiris Winton on 21 December 2012