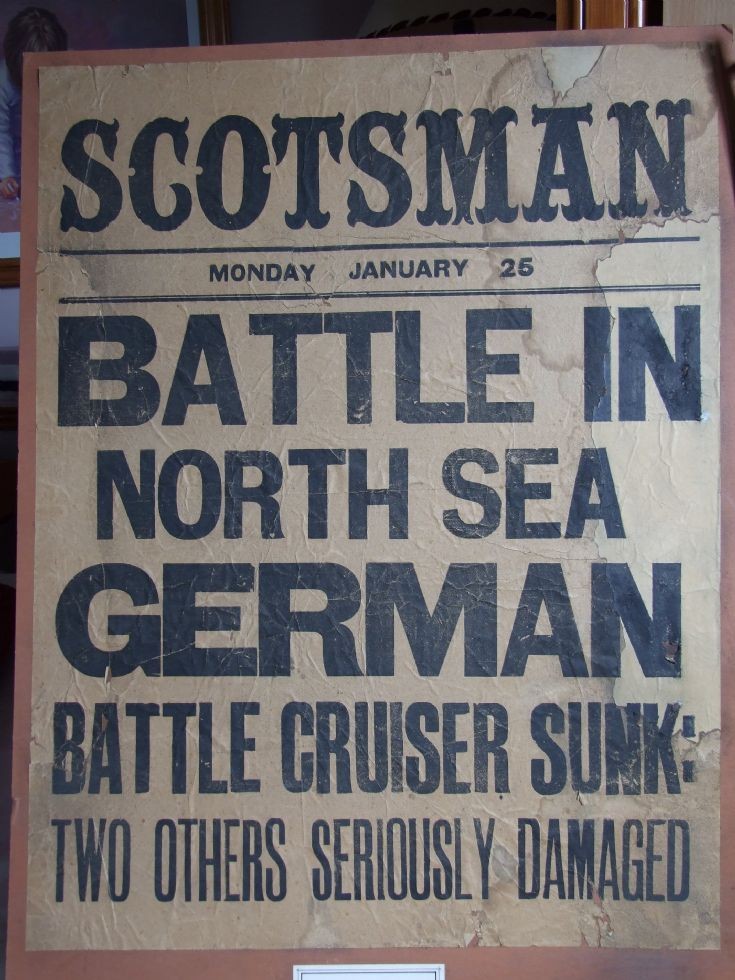 I found this Scotsman Headline under the floor of my Dad's Chemist's Shop when he retired. It refers to the Battle of Dogger Bank on the 24th January 1915, the largest naval battle of World War 1 up to that date. The German battlecruiser Blucher was sunk, and Seydlitz, Derfflinger and Kolberg were badly damaged. The Germans lost 1000 sailers killed, but despite major damage to HMS Lion, only 15 British sailers were killed. Some of the British ships were based in the Cromarty Firth. This original (but damaged) poster is dated the day after the battle, which took place on a Sunday!
Picture added on 25 July 2012 at 15:23
Comments:
Hi Campbell. I was very interested to read your article. I had the same experience many years ago when I was removing a piece of old lino for Annie Bryce. Among the papers I picked up, and the only one worth saving which I still have, was the "North Star" June 1928. The Cromarty notes featured details of a presentation to Miss Linklater infant mistress Cromarty HG on the occasion of her retirement after 40 years service. The "Ailsa" (Capt J Watson) went to the aid of a fishing vessel on fire and sinking off Lossiemouth. On the sporting front Cromarty met Alness in a bowling match. The Cromarty team included the well known names of W Ligerwood, D M Junor, J M Couper, D Malcolm, and T Gaskill. Just for the record Cromarty won by 36 shots, and Mrs Hay and committee served tea after the event.
Added by Alex Grant on 26 July 2012
Hi Alex. Seems like old newspapers were the best underlay (probably the only one!!) for lino in these days. Your underlay seems to have been a lot more interesting than mine - at least you got a few local stories out of yours!
Added by Campbell Ross on 11 August 2012