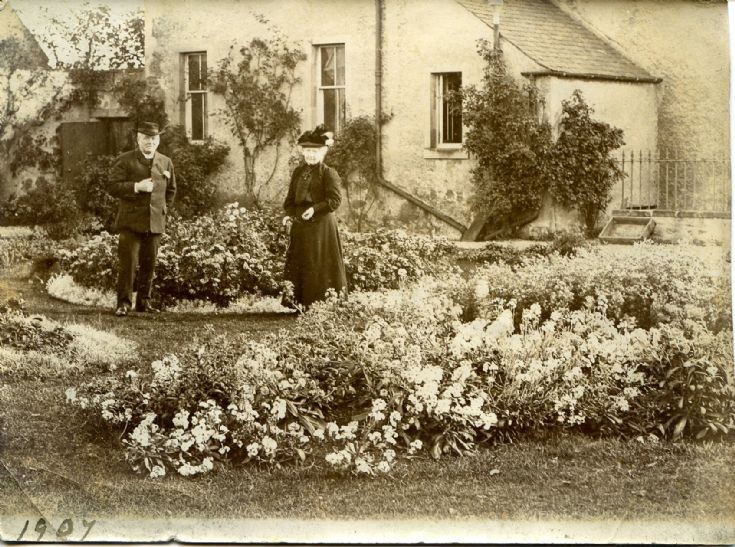 At this time Forsyth House was the manse for the West Church. While this photo has the date 1907 on it another, which seems to come from the same time has "1914?" on the back.

The Scotts owned Rosenberg at that time, and it seems they spent the year between there and Forsyth House. Rosenberg had been inherited from the famous Dr. William Brydon by his son Hector, but Hector finally felt it was too much for him and handed it over to his sister "Polly".

Hector spent his last few years as a boarder with my grandparents at York House. My mother remembered a huge man with a cape and a massive hat. I think he may have been huge just in the eyes of a 4-year old, as his father was a short man.

See also picture #3436.
Picture added on 28 December 2013 at 21:59
Comments:
Oops. Hector would have inherited Rosenberg from his mother, not his father, as I think "Polly" (I can't remember her proper name) was already widowed when she bought Rosenberg. My grandfather worked as a grieve for the Scotts, which is probably why we came to have photos of them.
Added by Ruth MacGregor on 31 December 2013
Fascinated to see this photo, Ruth, as it adds to my growing history of Rosenberg and its various occupants. The story of Hector and Rosenberg is actually this: William Brydon died in March 1873, leaving his widow Colina and 5 of their 8 children dependent on a very meagre pension. Because of Army links with the laird of Cromarty (Lieutenant Colonel George William Holmes Ross) Colina moved across the firth from Pitcalzean House with her family to rent Colonel Ross' property, Rosenberg. In 1876 Colonel Ross sold the house to Colina's uncle, Colonel Hector Mackenzie of Meadowbank, Fortrose, and he let his niece live in it rent-free, for the rest of her life.

Colina died in 1899 and the house passed to her eldest surviving son, Hector, who returned from Australia after her death. He doesn't seem to have lived in Rosenberg at all, preferring to live with your grandparents in York House. On 8 August 1911 he conveyed Rosenberg to his sister Mary Ann (Polly) Scott, married to the Rev Walter Scott. The Scotts agreed to pay Hector £35 a year "for all the days of his life" but he died a year later in December 1912, aged 64. Polly herself died in 1932 when the house passed to her son, Walter Francis Brydon Scott. In 1922 he had married Lucy Edmonds and they stayed in Links House, Braehead (though it seems she preferred to live in England) and when Francis died in 1940, Rosenberg was sold at auction in March 1941 to John Paterson of Croma, Hilton.

Several members of the Paterson family owned and/or lived in Rosenberg until 1959 when it was sold to the R W Brooke Trust for Jay Duff to live in. It's wonderful to see photos of people who have just been names until now!
Added by Fran Tilbrook on 03 January 2014
Fran, many thanks for filling in so many blanks. My grandfather was still working, for Francis, in 1936,when he was 69, and in letters written to him by Francis' sister M. Romanes, she deplores the fact that he hadn't been paid his wages for some time, and promises to pay him herself if Francis isn't forthcoming! Her letter is delightfully indiscrete in its comments about Francis and others.
Added by Ruth MacGregor on 04 January 2014
I wonder if anyone knows the names of the children of the Rev. Walter Scott? My husband, Ian, is his great grandson and there are some significant "holes" in the family tree that I am trying to fill! Any information about the family would be most interesting. I spent a wonderful couple of days in Cromarty in the late 70's enjoying the East Church before it was rebuilt and absorbing the history of the town. We live in Canada, but some day we would like to visit Cromarty again. Meanwhile, we continue to visit your archive, which we thoroughly enjoy! Thank you for keeping it up!
Added by Kathie Scott on 01 November 2014
Children of the Scotts were Francis and Mary Ann who married a Romanes. I have somewhere a photo of Francis and my grandfather. My grandfather was employed by the Rev. Scott for many years, and continued to work for the family once Francis inherited.
Incidentally, Forsyth House was the manse for the East Church, not the West as I said above.
Added by Ruth MaGregor on 07 November 2014
Rev Walter Scott was a widower when he married Colina Brydon's daughter, Mary Ann (Polly). Together they had one son, Francis. But his two children by his first marriage were a son (named?) and a daughter (Mary Ann) who married a Romanes and who wrote so warmly to your grandfather, Ruth. I'll try to find out the son's name, Kathie.
Added by Fran Tilbrook on 08 November 2014
Bingo: I've managed to shed more light on the Scott family which should help you, Kathie.

Annie Allan (born 12.9.1840) married Rev Walter Scott, Minister of Cromarty on 22.12.1876, in Edinburgh. They had two children: James Walter Montague of Victoria, British Columbia. Born 28.12.1878 at 5 Hillside Crescent, Edinburgh. Served with 42nd Battalian, Canadian Infantry, during the First World War. He married Henrietta de Satge and they had three children: Cosmo (b 1904) Ian (born 1905) and Evelyn (born 1907). The Scotts' daughter, born on 13.10.1877 at the same address in Edinburgh, was not Mary Ann, as we had thought, but Mina Alexander Allan (although I've also seen it written as Mima Alexandra Allan). On 31.1.1905 in Cromarty, she married George Ernest Romanes of Pitcalzean, Nigg, son of George John Romanes, a distinguished biologist and protege of Darwin. Mina/Mima and George Ernest (who died aged only 29 in the USA) had two sons: George Christopher (born 1.1.1907 in Cromarty) later known as Father Ninian, a monk; and Walter John (born 15.1.1910 at Nigg) later known as Father Andrew, also a monk.
Added by Fran Tilbrook on 09 November 2014
I have the marriage certificate of James Walter Montague Scott. He married Henriette de Satgé (daughter of an Anglican church warden) in Dinan (France) in 1903. It states that his mother, Annie Allan, died in Crieff on 24th September 1880. The Scotts' 3 children were all born in France. The 1921 British Columbia census places the family in North Vancouver. Henriette died in 1939. I have no idea when James W.M. Scott died, it would be of interest for a book I am writing about the British community in Dinan in the late 19th / early 20th century. I am looking for photos too, so if anyone has a photo of James W.M. Scott, it would be fantastic. Hope this is of help!
Added by Diane Moore on 23 February 2015