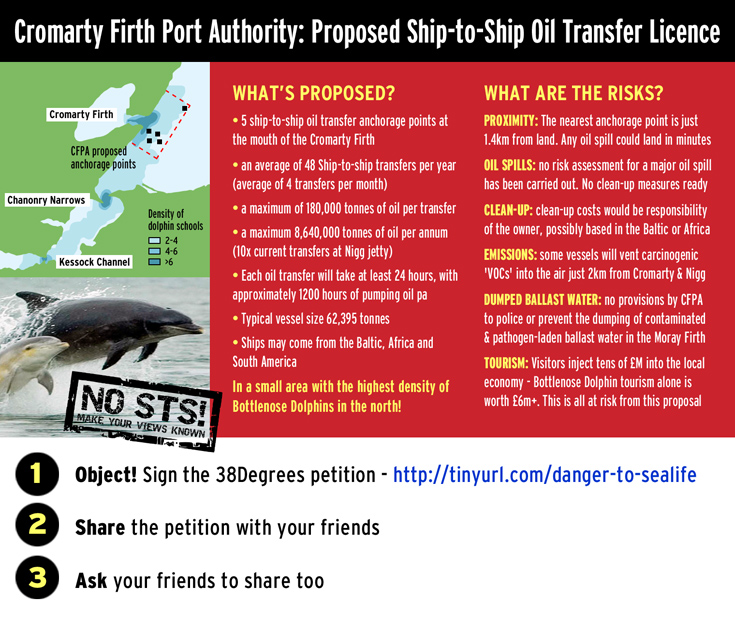 An application has been made to pump crude oil from ship-to-ship in the Cromarty Firth. BUT in exactly the place where one of the highest populations of bottlenose dolphins in Europe live and breed!

- Nearly 2 MILLION TONNES of dirty water (ships ballast water) will be discharged directly on top of them each year.

In 2015 the International Tanker Owners Pollution Federation Ltd reported 8 oil spills from tankers totalling over 7000 tonnes of oilspilled into the sea around the world.

View Large Version
Picture added on 12 September 2016 at 11:16
Comments:
Hi Colin, add my name to the list, those waters have always been clear and they should stay that way!! I was brought up there, my mother, grandparents and relatives are buried there and I have living relatives there.
Added by Tony Fraser on 13 September 2016
The dolphins here in the Cromarty Firth and at Chanonry Point Rosemarkie are an important part of our life and that of tourists to the area. Don't ruin it!
Added by David Hart on 24 September 2016
I was unable to get into the above website. Can you help so that I can sign the petition please?
Added by Shelagh Luck (MacAulay) on 05 October 2016
I copied and pasted the url and it worked OK.
Anonymous comment added on 07 October 2016
If anyone is having difficulty reaching the donation site or the petition site then just go to www.cromartyrising.com and you will find links to both. Thanks.....Duncan.
Added by Duncan Bowers on 11 November 2016