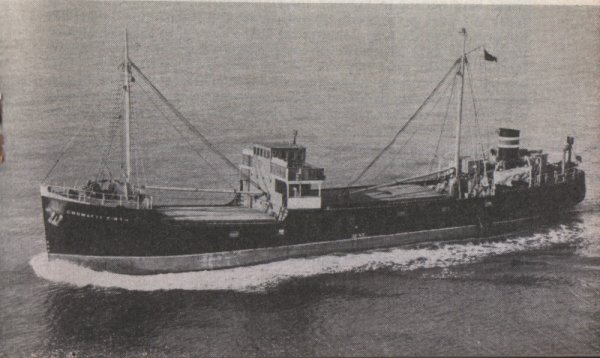 Owned by a Newcastle shipping company, the MV Cromarty Firth was the third of that name. Built in 1937, she grossed 538 tons, and was requisitioned in 1940. For the next 18 months she carried stores to and fro Scapa, and was also involved in the Norwegian campaign of April 1940, and survived sustained bombing. Carrying ammunition back to the west coast she missed, by a few hours, being sunk by German Battlecruisers - HMS Glorious, an aircraft carrier and other naval vessels were not so lucky. In 1942 she supported the invasion of North Africa, again as an Ammunition ship. She served in the Med until 1944, until the growth of weed on her hull reduced her speed to 4 knots. She then returned to the UK and refitted at Aberdeen, when the above picture was taken. Sold in 1957 and renamed Herriesdale.

Picture and Information from Sea Breezes Magazine - May 1959 edition
Picture added on 11 November 2003
Comments:
Owned by Gillie & Blair, Newcastle. Other ships owned by this company included Moray Firth, Moray Firth IV, Pentlandite Firth, Beauly Firth and Olna Firth. They were regular visitors to the North of Scotland.
Added by Ken Wood on 28 March 2013