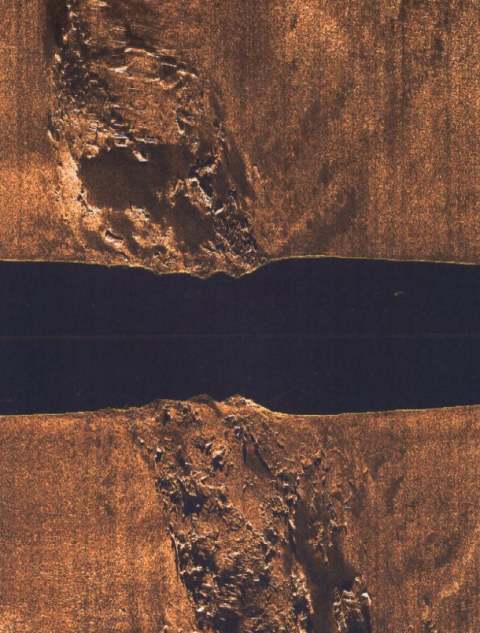 Ian says "This is a recent sonar scan photograph of the remains of HMS Natal. Photograph courtesy Gordon Campbell of Aspect Land and Hydrographic Surveys.

The black part in the middle is just a blind spot immediately under the boat with the scanners transmitting on either side so it is the jumble of wreckage on top and bottom which is all thats left of the Natal"
Picture added on 17 March 2004
Comments:
When the Natal's armour plating was being salvaged in the late 1930s, high explosive was used to tear the wreck apart, so this might explain why the ship has disintegrated.
Added by Malcolm on 17 February 2005
I have a part of the HMS NATAL at home. It's one of the drains that my great-grandfather took before it sank. It is in immaculate condition and stamped with HMS NATAL.
Added by Scott Watson on 07 February 2010
I remember Wombat telling me, everybody has to open their windows! in case they break? Was big bangs.
Added by Colin Morrison on 28 October 2011