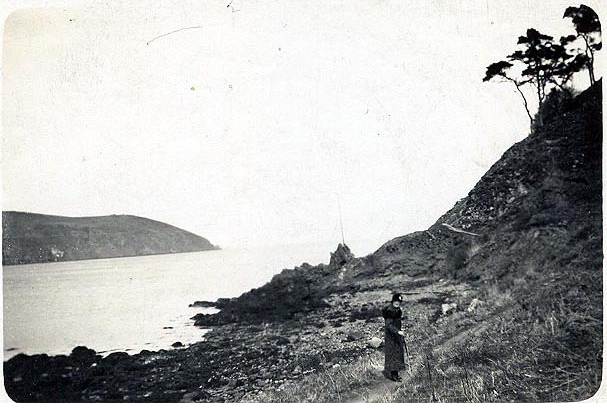 Mary says:- "The figure shown is my grandmother, Bella Chapman, and I reckon that that the picture may have been taken in the 1940s.

This was obviously a popular walk for our family. Many a time, since I was quite young, we used to go for a walk 'along the rocks', normally as far as the Dripping Cave. This was sometimes quite exciting as a youngster, especially when the tide was in, having to clamber round narrow ledges to avoid the spume. I still have a scar on my leg as the result of a fall when I was 8 years old from a large rock which I chose to try and climb over instead of around. (This rock was actually not so large when I was grown up!)

Do people still visit the Dripping Cave? Can one still get into it? My recollection is that there was a huge stalagtite at the mouth of the cave that you had to edge round to get in - presumably it will have grown a bit since then..."
Picture added on 30 March 2004
Comments:
I can still get in it!
Added by MAG on 31 March 2004
So can I 'just'. It's the 'Drooping Cave' by the way. There was an old story that there was a bigger cavern in the back, but that it had closed up due to the stalagtites.
Added by Sue Florence on 03 April 2004
I think actually that it is either or Sue - the Dripping or the Drooping Cave! It certainly is both - we always called it the former - and it surely did drip!

Added by Mary Campbell (Munro) on 03 April 2004
"A cave with wells, called the 'dropping cave' at Cromarty, has a demon in its inner recesses". A quote from China and Japan, Myths and Legends, by Donald A Mackenzie.
Added by Catherine Penman on 06 April 2004