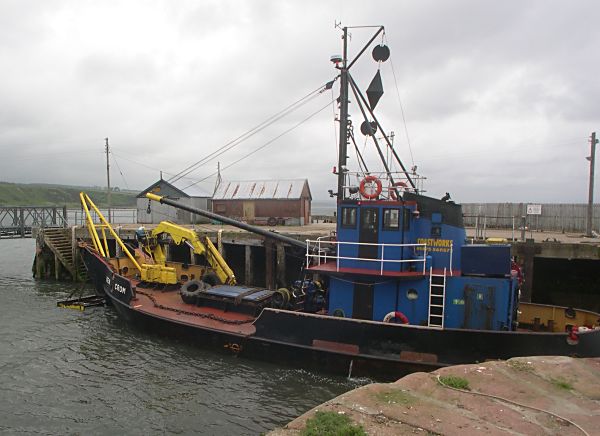 The 'Ben Crom' from Coastworks of Newry is here to do between 5 and 20 days dredging. Although the name seems to suit Cromarty, it's actually a mountain in Ireland.

The large box at the front is being lowered down to the sea-bed. Once in position it is dragged backwards by the Ben Crom and emptied about 50 yards outside the harbour. The silt in the box is never lifted above the water, as then dropping it back in would incur taxes, even though it had only been out of the water for a few seconds!

Once the channel and outer part of the harbour have been dredged, a digger will be brought in to clear the cobbles in the top half of the harbour.
Picture added on 23 June 2004 at 17:28
Comments:
Talking of the harbour silting up - was the purpose of the now blocked up archway in the Parapet Wall to keep the harbour free of silt and mud? Some of the old photos show pretty big sailing ships close in to the shoreline here. Can anyone remember when the archway was closed off and why?
Added by Campbell Ross on 25 June 2004
Not sure when it was blocked off Campbell but the reason was that with the shape of the dump (now the boat park) becoming more prominant the flood tide was taking more silt in through the arch way than the ebb was taking out.
Added by Ronald Young on 28 June 2004