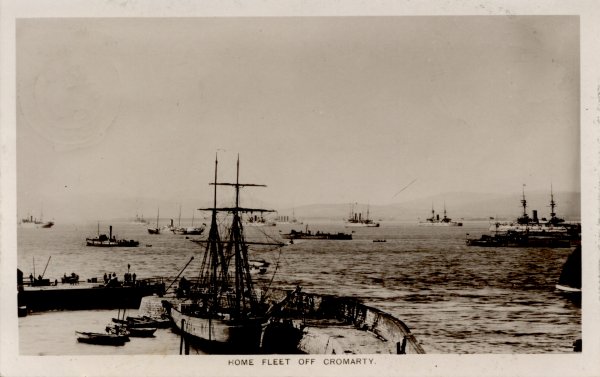 This is a view of the Harbour and Fleet that I have not seen before. It is from Postcard published by Bain, Cromarty which was sent in 1910. It also has on the back "Cromarty. By The Highland Railway". It was sent to me by Mr Tony Harden, and Mr John Alsop, who collect railway postcards, and were interested in the Railway Connection.

Here is the text of my reply to their question - please correct if I have anything wrong, either in fact or opinion:-

"Thanks for the e-mail – I assume that got my e-mail from the Cromarty Image Library, where I posted a series of photos from a book that John Bain published in 1900. He was local Draper and Clothier (and entrepreneur with other business interests), who around the turn of the last century was trying to establish Cromarty as a fashionable Holiday destination in the North of Scotland."

"The town – which had the Highland's principal port in the 17th, 18th and early 19th Century, had regular boats to Edinburgh and London for example - had gone into decline with the arrival of Railways to Scotland in the mid and late 19th Century, which bypassed the town completely. By 1900 Cromarty was reached by taking the Highland Railway, north from Inverness to Invergordon, and taking a ferry the few miles over the Cromarty Firth to the Town."

"My guess would be that John Bain did publish the postcard, and was trying to assure potential tourists that Cromarty was accessible by rail, by adding the phrase “By the Highland Railway”. I am not aware of any formal link that he had with the railway company. The annual arrival of the Home Fleet was a major economic boost for the whole area, as families and friends of the officers would take a house or lodgings for the whole summer - often in Cromarty, and there was keen competition to make the most of the fleet’s annual visit."

Picture added on 19 August 2004 at 21:26
Comments:
"By the Highland Railway" might also have been a reference to the way the post from Cromarty travelled, which was via the Invergordon ferry and then on to the train. I've recently been talking to someone in Invergordon who worked on the post as a boy in the 1930s and used to take the incoming Cromarty mail bags from Invergordon station to Albert Watson's boat and collect the outgoing mail for the journey in the opposite direction.
Added by Estelle Quick on 23 August 2004