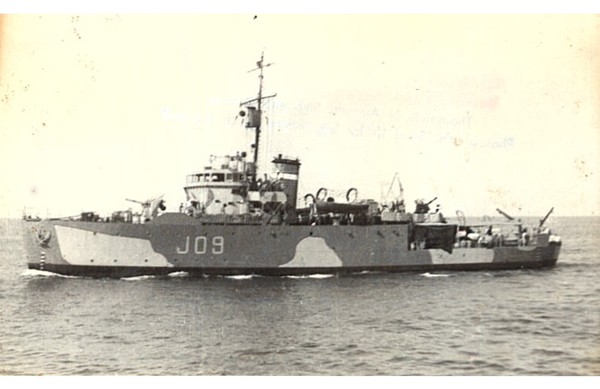 Bangor Class Minesweeper lunched 1941. She was sunk on 23rd October 1943 in the Straits of Bonificio, (Sardinia) ironically having struck a mine.

She was involved in the capture of an Italian submarine 'Bronzo' off the coast of Sicily in July 1943.
Picture added on 11 September 2004 at 11:22
Comments:
My Great Uncle served on the Cromarty, Leading Telegraphist William Jones, and went down with her on 23/10/43. I would appriciate it if anyone could give me more info, especially anyone who knew Bill.
Added by Mark Jones on 02 December 2004
Despite her short life, less than two years, HMS Cromarty, along with HMS Cromer, were described as the "outstanding ships of the gallant 14th Flotilla". She was sunk with the loss of 5 officers and 20 ratings. Her C/O was Commander C G Palmer, DSC & Bar, VRD, RNZNVR, MIS, a naval volunteer officer who was a company director from Auckland, NZ. He survived the sinking but spent a year in hospital. 61 other crew were believed to have survived.
Added by Campbell Ross on 25 May 2005
Whilst looking for details of HMS Cromarty, I came across a crew list for HMS Victory at the Battle of Trafalgar. The list includes a Robert Shadd (22) of Cromarty. He is described as a "landsman", which apparently means he was on his first sea trip. Now there's a story, if anyone can find out who he was!
He seems to have survived unscathed!
Added by Campbell Ross on 25 May 2005
My uncle also went down on the HMS Cromarty on 23.10.43. He was Melvin Edward O'Brien, age 22. He also served on HMS Drake and joined the Royal Navy at the age of 16 before the start of the second world war. The last contact the family had of Melvin was when his elder brother, Douglas, met him quite by accident in Tripoli a little while before his ship went down. I would be grateful for any information concerning his service in the Royal Navy.
Added by Melvin O'brien on 01 October 2006
My Brother Stanley Truelove also went down on 2 October 1943 aged 20. Any informtion would be appreciated
Added by Peyer Colin Truelove on 27 June 2008
My Father, Edmund (Ted) Povah was a Signalman aboard HMS Cromarty, fortunately he survived the mine that day. He subsequently went to New Zealand in the 90's and was reunited with his old skipper. He also provided information and photographs to the museum in Cromarty of the ship.
Added by John Edmund Povah on 15 March 2010
I came across this website while researching a presentation on my father's ship, HMS Seaham - a sister ship to the Cromarty and part of the 14th Minesweeping Flotilla.

My father, then Lieut. Commander Robert E. Brett, upon witnessing the mining of the Cromarty, navigated HMS Seaham into the minefield to pick up survivors. Leading Seaman, Paul Jasper who I interviewed in 1995, stated that mines were popping up during that sweeping operation like blackberries and only due to my father's superb navigating skills that they did not share the same fate as the Cromarty.Needless to say, Commander Palmer was picked up with the survivors, his legs badly mangled so that for the rest of his life he walked with a cane.My father being second in command of the flotilla then became senior officer of the group. For Captain Brett's efforts in this operation, he was awarded the DSC.

Added by Richard James on 19 December 2017
Bernard Upton's book about the sinking of HMS Cromarty is a great read, really helped understand & see what my dad William (Bill) Smith did during the war, saddened that he did not get the opportunity to read this himself as he was always talking about the Cromarty even though he was only on it a short time & was on numerous other ships throughout the war years.
Added by Barbara McCormick on 15 January 2018
Dear Barbara,
Thank you for your comments and delighted that you enjoyed the book.
Regards,
Richard
Added by Richard James on 15 January 2018
I've just finished reading the book too Richard. I have to say it was a pleasure, although bitter- sweet at the same time. I think Bernard would be very pleased with it, and I know my Dad, Norman Hinchliffe, would have been too. Thank you, Glenis
Added by Glenis Brindley on 18 January 2018
Dear Glenis,
Thank you for your comments.
Best wishes,
Richard
Added by Richard James on 19 January 2018
You're most welcome Richard, I think you've done a sterling job. Regards Glenis
Added by Glenis Brindley on 19 January 2018
My father George Long was a gunner on HMS Seaham. He is still alive (aged 92) but his memories are fading fast.
Added by Derek Long on 14 February 2018
Dear Derek,

I have sent you a personal email. Your father must have been very young (17) at the time if he was on SEAHAM in Oct 1943.
Added by Richard James on 23 February 2018
He was born on 22/12/25 but gave his birth date as 22/12/23 thus enabling him to enlist. As he still says they were grabbing volunteers with both arms.
Added by Derek Long on 06 March 2018
Hi, does anybody remember the chief engineer Reginald Cox who lost his life on the Cromarty 1943?
Added by Nick blackford on 29 July 2018
It's nice to see there are still people adding comments on this page. Richard James worked very hard to collate his uncle's memoirs and get all this info together, and his book is really good. I'd recommend it to anyone with an interest in Cromarty. Glenis Brindley.
Added by Glenis Brindley on 09 August 2018
Dear Nick,
The story of how Reginald Cox lost his life is covered in the book - "On the road to Normandy" by Bernard Upton and is available on ebay at just £9.99 inc P&P.
Added by Richard on 10 August 2018
It was Warrant Engineer Richard Edward Cox, DSM, who was killed when the Cromarty went down, not Reginald. Here at Dartford Borough Museum I have been researching the deaths during the Second World War of local servicemen and I came across this site while looking for details of Richard Cox and how he died.
Added by Mike Still on 30 November 2018
interested in the survivors for this ship believe 61 survived with many wounded does Bernard Rollin Upton elaborate on this I believe he was the other surviving officer?
Added by Ian Mcleod on 27 October 2019
Hello Richard
Very nice book heartily recommend this book to anyone!
Kind regards Ian
Added by Ian Mcleod on 20 December 2019
Hello Richard, I have only just started researching the life of Harold William Columbus age 19 of Tattingstone, Suffolk who died on HMS Cromarty when it went down so any info you can provide would be appreciated. Thanks and kind regards Jane Kirk, Tattingstone
Added by Jane Kirk on 03 May 2020
Will get my mother to post on here soon.She is one of three surviving children from Engineer R.E Cox who lost his life when HMS Cromarty sank.
Added by Russell Samson on 11 May 2020
Hello Jane Kirk,
I can confirm that Uncle Bernard listed Harold William Columbus as "lost in action", in his book.
Search on ebay for second world war and Royal Navy and minesweeper.
HWC is also commemorated on the Portsmouth Naval Memorial. Further details in the book.

Added by Richard James on 17 May 2020
Richard. How lovely it is to see that people are even now finding out about the Cromarty, and the wealth of knowledge to be found here. Well done on carrying on the work started by your Uncle Bernard. Regards, Glenis Brindley.
Added by Glenis Brindley on 17 May 2020
Further to my earlier post, my father George Christopher Long who served as a gunner on HMS Seaham from 1942 died on 18th May age 94. I believe he was the last surviving member of the ship, but am happy to be corrected.
Added by Derek Long on 22 May 2020
Thank you Glenis. Another book went this week to a relative of a Sailor lost on 23 October 1943.
Added by Richard James on 23 May 2020
Thank you for the replies and info so far. I plan to research the story of H W Columbus for the 80th anniversary of his death so if anything else comes up I'd be very grateful.
Added by Jane Kirk on 23 May 2020
I'm researching my family history and have found that my great grandfather, Stoker Petty Officer Thomas Joseph Crisp, served on HMS Cromarty and was mentioned in despatches in the 25 August 1942 edition of the London Gazette. I can't find the reason or any citation relating to the MID and will be grateful if anyone has any information or can point me in the right direction please.
Added by Mark Crisp on 25 July 2021
Hello Mark, Your great grandfather served on HMS Cromarty with my Uncle - Bernard Upton. Please buy this book which will tell you all about 1942.
www.ebay.co.uk/itm/265260016488

Added by Richard James on 09 August 2021
Thank you very much Richard, I've just purchased a copy of the book and am looking forward to receiving and reading it.
Added by Mark Crisp on 10 August 2021
Just to add to the last comment. I have the book by Richard James and would recommend it to anyone who has an interest in HMS Cromarty. It's extremely detailed and will answer any questions you might have.
Added by Glenis Brindley on 11 August 2021
Mark - Your book was posted to you yesterday.